This relaxing tour of Vietnam is ideal for those travelling as a family in the summer months, carefully mixing active and cultural experiences with plenty of time on the beach. Starting in Hanoi, explore the winding streets of the old quarter on a cyclo tour and enjoy a water puppet show. Then travel to the waters of Halong Bay for a private two-night cruise on the luxurious Bhaya Legend. Enjoy your privately chartered cruise around the magical emerald islands dotted around the sea, where there is great fun to be had exploring caves, snorkelling, and kayaking. Fly south to the old Imperial Capital of Hue, and set out on a cycling tour through the countryside, as well as getting to grips with Vietnam's grand imperial past. Finally, finish with a full week at the charming beachside town of Hoi An, where you can spend several days relaxing on the beach and wandering around the atmospheric ancient town.

Day 2: Arrive in Hanoi, enjoy a cyclo tour of the Old Quarter and a Water Puppet Show

Private transfer: On arrival at Hanoi airport you will be met by your guide and transferred to your hotel to check in.

Afternoon cyclo tour of the Old Quarter & Water Puppet show: After some time to relax at your hotel you will set out to enjoy a relaxing cyclo ride through Hanoi's Old Quarter. The best way to explore the picturesque area of the Old Quarter is by "cyclo" (a three-wheeled bicycle taxi). Also known as the "36 Streets District", it was once the thriving commercial centre of the city. Each of the 36 short lanes used to specialise in a particular trade represented by one of the guilds. This is still reflected in the names of certain streets: like Silk Street, Gold Street and Fish Street. Among the ancient homes and attractive temples there is a multitude of tantalising souvenir shops.

Afterwards you will be dropped off at a nearby theatre to enjoy one of Vietnam's unique and traditional arts. Water puppetry is a highly entertaining form of theatre using the water surface as a stage. Standing waist-deep in the water, the master puppeteers are hidden behind a bamboo screen. The technical virtuosity of the puppeteers is startling and the music enticing. The entire atmosphere is truly enchanting. Many of the brief episodes relate to scenes of daily life. 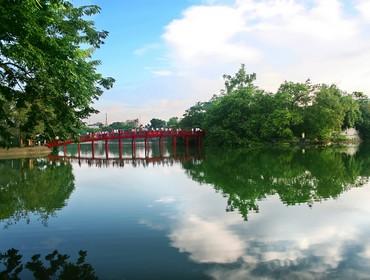 Day 3: Morning tour of Hanoi before spending an afternoon at leisure

Morning tour of Hanoi: After breakfast, start your tour of Hanoi with a visit to the 900 year old Temple of Literature, Vietnam's principal Confucian sanctuary and its historical centre of learning. Made up of five courtyards, this is one of the few remnants of the original city. Continue to the Soviet style Ba Dinh Square where Ho Chi Minh read out the declaration of the nation's independence in 1945. Visit the museum dedicated to Ho Chi Minh before passing through the mausoleum (you will be asked to remove hats if entering, and no shorts or vests are allowed) escorted by a soldier in full regalia. As you leave, you will be able to walk through the gardens of the Presidential Palace before seeing Ho Chi Minh's house, the modest dwelling he built based on a rural Vietnamese stilt house and where "Uncle Ho" lived for the last years of his life.

After your excursion you will be taken to ‘Pho Thin’, one of the oldest and most atmospheric ‘Pho’ Restaurants in Vietnam where you will enjoy a traditional lunch of beef noodle soup (Pho).

Afternoon at leisure in Hanoi: You have the afternoon at leisure to explore the Vietnamese capital independently. Stroll around the picturesque Hoan Kiem Lake, go shopping in the Old Quarter, or sample some of Hanoi’s many culinary delights. 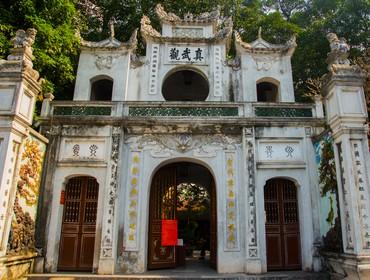 Day 4: Travel to Halong Bay and board a two-night private cruise

Private transfer to Halong Bay: This morning drive for approximately three hours through the Red River Delta to the coast and the Gulf of Tonkin, where the waters of Halong Bay are found.

Private Halong Bay Cruise on the Bhaya Legend Junk: Board your private boat, the Bhaya Legend, in time for lunch, and set sail across the bay. Cruise to the famous islands of Halong Bay and onto Bai Tu Long Bay. Here there are opportunities to visit caves, swim, and explore the beautiful area by kayak. Return to your private boat in the evening for dinner and overnight.

Accommodation: Stay tonight on board the Bhaya Legend Junk 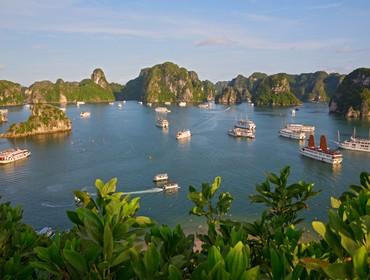 Halong Bay Cruise: After breakfast, cruise to some of Halong Bay's more untouched areas, deep in Lan Ha Bay. Here you have the option of taking a light bike ride through the rainforest along the coast to Viet Hai village, or simply relaxing on the beach. Lunch will be served back on board the junk while your guide explains more about Halong culture and its rich natural beauty. In the afternoon visit fishing villages and you also have the option of kayaking around Ho Ba Ham area before anchoring for the night. Dinner is served on board.

Accommodation: Stay tonight on board the Bhaya Legend Junk 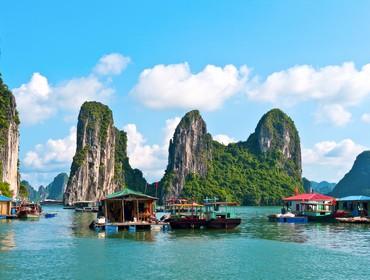 Day 6: Disembark your cruise, and fly from Hanoi to Hue

Road journey from Halong Bay to Hanoi: Upon arrival at the quay, you will be met by your private guide and transferred back to Hanoi. En-route you will stop off at the Phu Lang ‘ceramic village' where the villagers have been practising this traditional craft for generations. Continue to Hanoi airport in time to catch your onward flight.

Private transfer: On arrival in Hue, you will be met by your guide and driver and transferred to your hotel to check in. 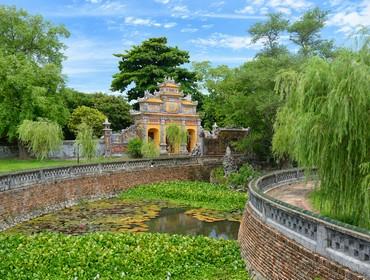 Day 7: Morning cycling in the countryside, followed by an afternoon tour of 'Ancient Hue'

Morning cycling tour to Nguyet Bieu Village: After breakfast this morning you will be met by your guide, who will give a short briefing about the conditions of the road ahead and the sites chosen for your 9km cycling tour. Drop in first at the bronze-casting village of Phuong Duc for a visit to one of the 20 foundries still in operation here. Learn the usage of a great number of tools the craftsmen use at work and an interesting casting demonstration is held on site for you. Ride on to take a look at the Royal Arena, the former site for fights between elephants and tigers held by the Nguyen Dynasty to demonstrate their will and power. Continue to the lush and lively farming village of Nguyet Bieu, famous for its grapefruit. Your first stop here will be at the Hoang family chapel to meet with one of the patriarchs of the extended family for a talk about the annual ancestral worship they hold here, to learn how traditions still live on and thrive in the rural areas of Vietnam. Afterwards, cycle along the rural paths, enjoying the peaceful and serene atmosphere of the village. Drop in at one of the grapefruit orchards here for a visit and interact with the local farmers. If the fruit is in season, enjoy the well-known fine, perfect taste of their product. On the way back, you can stop off at Tu Duc Mausoleum, one of the most popular of Hue's famous Royal Mausoleums. Lunch will be taken at a local restaurant.

Afternoon tour of the Imperial Citadel, Thien Mu Pagoda & Perfume River cruise: This afternoon visit the Imperial Citadel and the Forbidden Purple City nearby. Modelled on the Forbidden City in Beijing by the Nguyen emperors in the early 19th century, the city was badly damaged during the war but the imposing city walls surrounded by a large moat afford good views of Hué. The palace retains a feeling of its past scale and importance, with detailed stonework and pavilions and it is at the moment in the process of being restored to its former magnificence. Continue to Thien Mu Pagoda, sitting on the riverbank outside the city. This octagonal seven tier stupa has long been regarded as the symbol of Hué and was founded in 1601. It is still a site of Buddhist worship and its huge bell is said to be audible from the city. In the late afternoon, enjoy a cruise downstream on the Perfume River, named after the tree resins and blossoms it carries on its way to the Pacific. 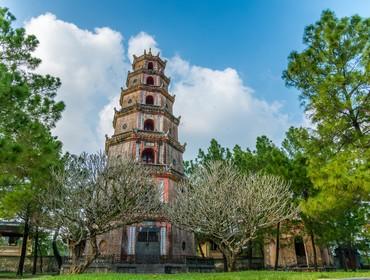 Day 8: Road journey from Hue to Hoi An

Road journey from Hue to Hoi An: You will be driven south, along Highway 1, to Hoi An, a journey of approximately three hours. Soon the highway meets the Hai Van Pass (meaning Pass of the Ocean Clouds). There are some spectacular vista points and photo opportunities en-route as the Truong Son mountain range cuts across the narrow centre of the country. The mountain range has created a barrier to the cold airstreams from the north which often results in thick cloudbanks over the peaks. The pass has been a strategic military focal point during Vietnam's turbulent history and from the top there are views of the curve of Danang Bay. En route pass through the port city of Danang with the option of stopping to see the famous 'Danang Beach' before continuing south to Hoi An where you will check-in to your hotel by the beach. 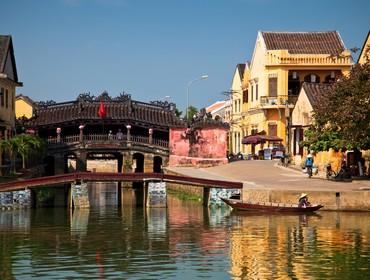 Days at leisure: You have six days free to relax in Hoi An. Your hotel is located by the beach, but Hoi An's charming Ancient Town is just a short drive away. Alternatively, there are also opportunities to cycle in the beautiful countryside, visit the ruins at My Son, discover the artists of Hoi An or see a tailor to get some clothes made.

Accommodation: Stay these nights at the Boutique Hoi An Resort (Deluxe Room) 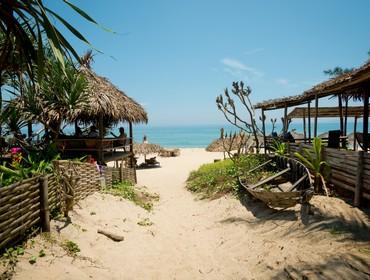 An Bang Beach, Hoi An

Private transfer: After a final day at leisure, you will be met and transferred to the airport in Danang for the Vietnam Airlines flight to Saigon. 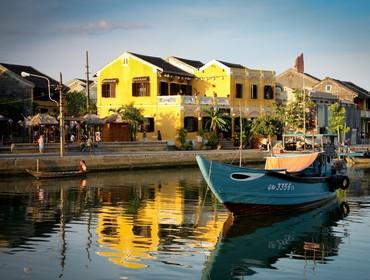 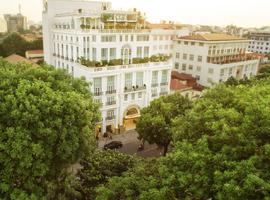 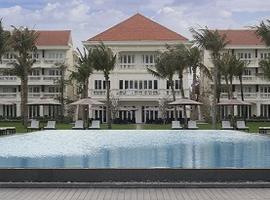 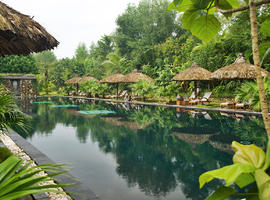 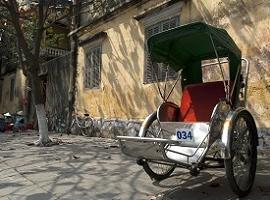 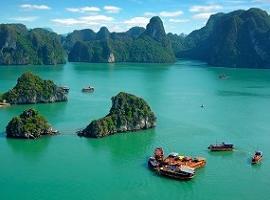 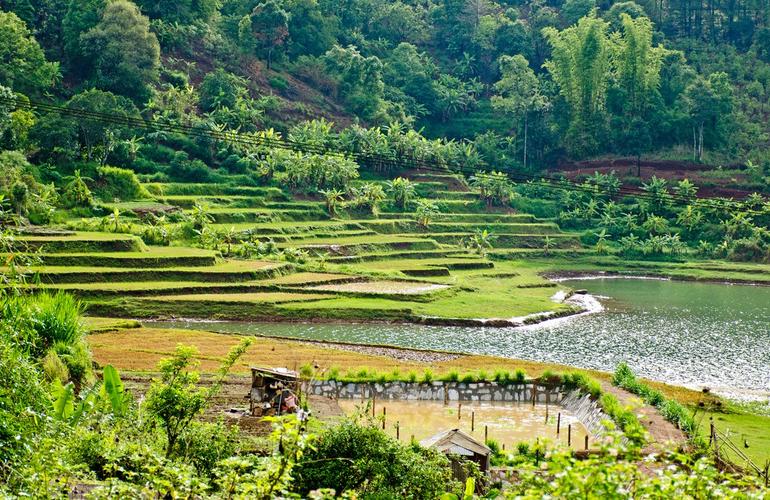 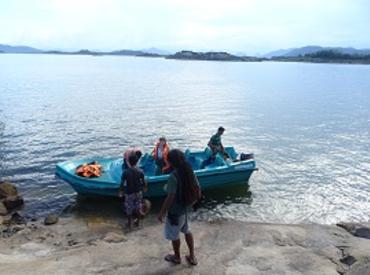 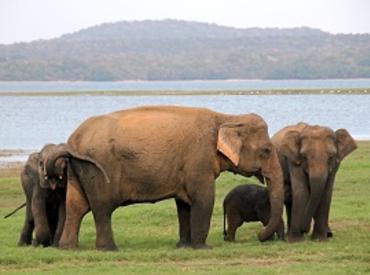 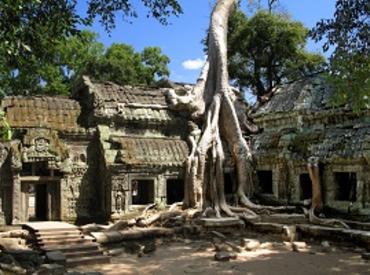 The Highlights of Indochina
Classic
Multi-Country
A carefully planned itinerary of the highlights of Cambodia, Laos, and Vietnam.
16 days from £2,995 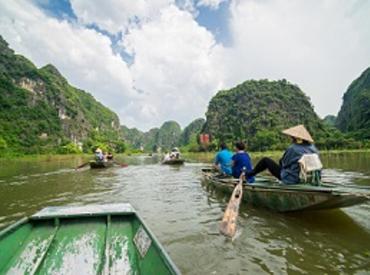 Vietnam Explorer for Families
Bespoke Family Tours
Vietnam
A tour of Vietnam for active families and beach lovers.
15 days from £2,495
View all Vietnam toursView all Multi-country tours
Back to Top