The central and eastern part of Papua New Guinea covers a large part of the main island which includes Port Moresby – capital of PNG, and the gateway to most visitors’ adventures in this amazing country. Although Port Moresby does have some worthwhile sights, visitors tend to move on pretty quickly and in this region of the country that might be to see the natural splendours around Tufi, with its rugged coastline and colourful coral reefs, or Milne Bay with its WW2 history and dramatic canoe festival, or perhaps the famous Kokoda Track – to do some trekking along one of the world’s most spectacular and challenging trails. 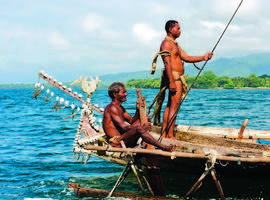 Alotau & Milne Bay
Alotau is a small provincial town in the southeast of Papua New Guinea that overlooks the scenic Milne Bay which saw serious action in World War II. As a result Alotau has a number of war memorials and other relics of interest for the history buff and families of WW2 combatants. 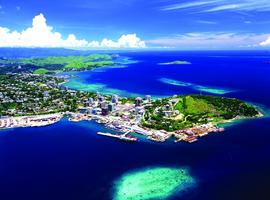 Port Moresby
The capital of Papua New Guinea, Port Moresby is likely to be your entry point to PNG and your first taste of life here. Over the years the city has acquired a rather fearsome reputation, but is not as rough and ready as it is sometimes made out to be and in places is really rather pleasant. 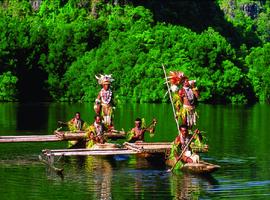 Tufi
Tufi is a small coastal town situated on Cape Nelson in Oro Province, a short flight from Port Moresby. The landscape surrounding Tufi is dominated by rias which are similar to fjords and provide a spectacular backdrop for this tranquil part of the country.