Dutch settlers first discovered this natural harbour, but it was not until 1722 that it was named Port Louis by the French after King Loius XV. Shortly after this the French East India company set up operations in the port after failing to secure a foothold operation in nearby Madagascar. Vice came hand in hand with trade, and Port Louis gained a reputation as a lawless destination for opium dens and brothels during the late 18th century. Following the arrival of the British in 1810 there was a devastating fire, followed by cyclones and outbreaks of malaria, that sent the inhabitants inland to the central plateau. It was not until the late 20th century that Port Louis was resurrected as the economic capital after it became a successful free port, and now has a population of around 100, 000 inhabitants.

With only a handful of hotels aimed at business travellers, Port Louis is best visited on a day trip. With three centuries of colonial history there is some fascinating architecture, such as the Government House in Place d’Armes which dates from French control in 1738, and the seafront Aapravasi Ghat that was the arrival depot for labourers from India during the British rule and now listed as a UNESCO World Heritage Site.

To get a flavour of the melting pot of ethnicities that coexist in Mauritius head to the Central Market on a weekday morning. Traders from India, China, Africa, the Middle East and Europe have been trading in the same location since Victorian times, and this is a great place to see local life away from the glitz and glamour of the beach resorts. Other places of interest in Port Louis include several interesting museums, including the Blue Penny Museum which is home to some priceless stamps and gives a general oversight of the island’s colonial past, the Jummah Mosque and Chinatown. A wide range of shops and restaurants can be found at Le Caudan Waterfront, a recently developed waterfront retail and entertainment complex.

Experiences to Inspire in Port Louis 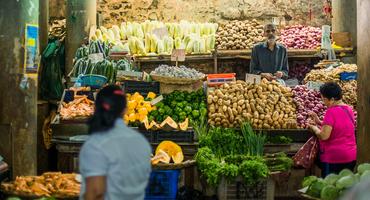