Back to Highlights of Inland

Pamplemousses is set 10km inland from the capital Port Louis, and a short drive from the beaches on the north coast, in one of the most populated parts of the island. Named after the grapefruit trees imported by the Dutch from Java, this small town attracts visitors from all corners of the island on day trips to explore the area’s many places of interest and enjoy lunch in one of the town’s excellent Creole restaurants. The biggest drawcard is the Sir Seewoosagur Ramgoolam Botanical Gardens, named after the first president of Mauritius. First established in 1770 by the aptly named French botanist Pierre Poivre, this garden is now the largest in the southern hemisphere and considered one of the best botanical collections in the world. The centrepiece is the Victorian pond filled with giant water lilies from Amazonia which grow vast new leaves within hours and change colour each day. Other notable features include curiously named species such as the fish poison tree, vast number of spice plants from Asia and over 80 species of palms collected from around the globe. Many of the island’s colourful bird species can be spotted in and amongst the foliage, which adds to the attraction.

Dating from 1797 the town’s sugar factory of Beau Plan was decommissioned in 1999 and since converted into one of the best museums on the island. The interactive exhibits at L’Aventure du Sucre brings the long history of the sugar industry and slavery in Mauritius to life, and reveal the complex process of transforming the juice of cane into crystals of sugar. There are 15 types of sugar to taste at the end of the tour, and a cane cutting experience can be booked in advance. Another place of interest worth visiting in Pamplemousses is the neoclassical Château Labourdonnais, dating from 1758, and considered the most elegant example of colonial architecture on the island. Guided tours are conducted of the mansion and extensive gardens, and there is an informal café, upmarket restaurant and boutique shop.

Experiences to Inspire in Pamplemousses 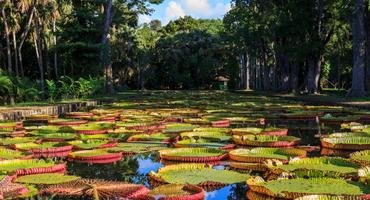